Electric distribution panels contain many of our most common inspection findings. These can range from minor details to major safety defects. If your inspection report contains some of these, don’t be alarmed; we are very picky, and many of the issues addressed here are common practice, if incorrect. In any case, we defer to the expertise of professional electricians to determine what should be corrected and how. Now, let’s take a look at some of the things we frequently see.

Undersized conductors/oversized breakers: This can be a serious safety issue in some cases. Conductors are sold in various sizes to accommodate various amounts of electric current, known as amperes or amps. Often compared to the flow of water through a garden hose, an amp is a measure of electron flow through a conductor. The purpose of a circuit breaker or fuse is to ensure that the current in the circuit does not exceed what the conductor can safely handle. If the circuit breaker allows more current (amps) than the conductor can handle, it can lead to overheating and present a fire hazard. If this condition has been flagged on your inspection report, it is important to call an electrical contractor to correct it right away.

Bonding of neutral & equipment grounds: Electric panels generally come from the manufacturer with the ability to be utilized as a service panel (a panel which contains the main disconnect and system grounding conductor) or as a downstream distribution panel (sometimes called an auxiliary panel). It is up to the installing electrician to ensure that the grounds and neutrals are configured properly for the application. Often, a critical component is a little green screw, called the bonding screw. This screw must be installed at the main service panel, and removed in a downstream panel. Put another way, the ground and neutral wires must be bonded to one another and to the panel enclosure at the panel containing the main disconnect and system ground, while the neutrals must be “floating” and isolated from the grounds and panel enclosure in a downstream panel. Why? The simplest answer would be “because the NEC (National Electrical Code) says so,” but we can do better than that. The next simplest way to put it: we want any voltage or ground faults to find their way to the system ground, which is located at the main service panel. If the voltage is riding a neutral wire back and has a stop at a downstream auxiliary panel where it is bonded to a metal panel enclosure via the neutral/ground bus, the enclosure can become energized and present a shock hazard. On second thought, maybe “because the NEC says so” is the simplest answer after all!

Antioxidant paste on aluminum conductors: Aluminum single strand branch circuit wiring is an issue for a separate article, but here we are focusing on multi-strand aluminum conductors frequently used for main service cables and 240V appliance circuits (AC, range, water heater, etc). Due to copper prices, these applications which require larger conductors (as discussed in the first part of this article) often use aluminum. When aluminum conductors are used, in most instances an antioxidant paste must be applied to reduce oxidation where oxygen in the air reacts with the aluminum. Excessive oxidation can lead to increased resistance, which can lead to increased heat, and in extreme cases present a fire hazard. Adding the paste is relatively simple, and most electricians keep it handy.

conductor shall terminate within the panelboard in an indi-

vidual terminal that is not also used for another conductor.

conductors shall be permitted to terminate in a single ter-

minal if the terminal is identified for connection of more

The code entry doesn’t leave much up to interpretation, but it is still a very common finding. Particularly on older panels, the bus bar may run out of terminals for each neutral to get it’s own lug. When two or more neutrals share a lug, a loose connection can result in increased resistance and overheating. If a neutral and ground share a lug, it may make diagnosing/servicing the circuit more difficult, as the neutral cannot be disconnected without also disconnecting the equipment ground. It is best to consult with an electrician to discuss options when these conditions are identified, and be aware that sometimes what may be a simple fix in one scenario can become much more expensive in another. If, for example, the only way to properly correct a minor issue is by installing an entirely new panel, you must pull permits and install the new panel in accordance with the current revision of the NEC. Sometimes, a little discretion can go a long way.

Double tapping/double lugging: Similar to the last entry, double lugging is a condition where multiple conductors are connected to a single breaker. Some breakers are designed to accept multiple conductors, others are not. If a breaker is not designed for it, multiple conductors can lead to a loose connection and overheating from increased resistance. Also a common finding, sometimes this can be fixed by adding a breaker (if space exists) or by pigtailing inside the breaker box. Again, we defer to an electrician to advise on the best course of action when this common finding comes up.

Seal putty missing at service conduit: Where the service cables enter the panel, a seal putty should be applied around the cables. This seal keeps pests, cold air, and humidity out of the panel enclosure. Most of the time, this is not a big deal. In some cases, excessive cold air entering the panel can lead to condensation developing where humid indoor air meets the cold surface of the panel. If we see indications of excessive condensation, it will be reported separately. In most cases, we simply recommend adding the seal as a precaution.

Incorrect screws: The panel cover (more properly referred to as the “dead front”) must be secured to the panel enclosure with the proper screws. These screws are blunt, so as not to puncture wire insulation and cause an arcing situation. We have come across many dead fronts using anything from drywall screws, to machine screws, sheetmetal screws, deck screws and anything in between. When we encounter this, we generally will not remove the dead front, as it may be unsafe. We advise an electrician remove the incorrect hardware, inspect for pierced wires, and install the correct screws.

Of course, this is not an all-inclusive list for every panel defect we encounter, but it probably covers about 90% of them. More often than not, we find at least one of these issues during the inspection. Keep in mind that most of them are relatively simple, inexpensive and common. 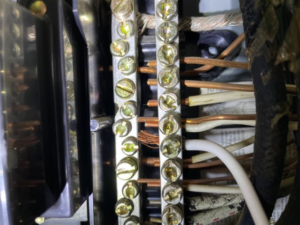 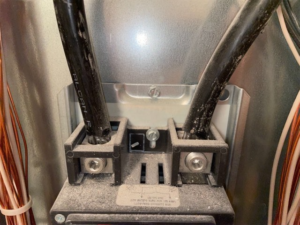 No antioxidant on aluminum service cables

No seal putty around conduit entrance

No seal putty around conduit entrance 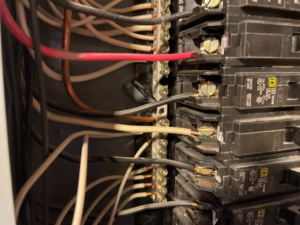 White whire in use as hot not properly marked 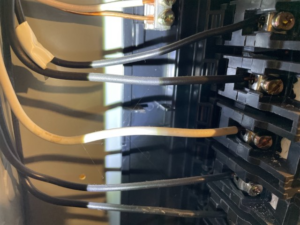 White wire in use as hot not properly marked 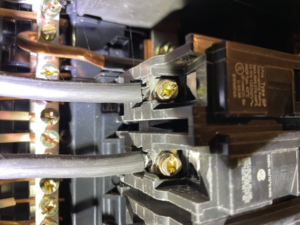 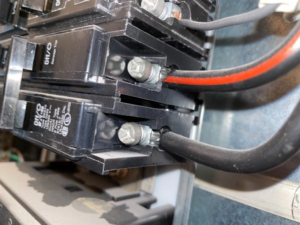 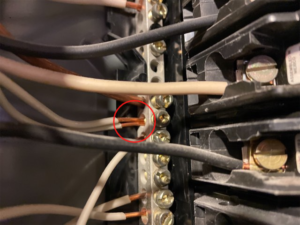 Multiple neutrals terminating under one lug 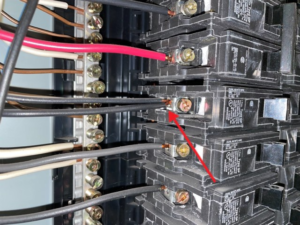 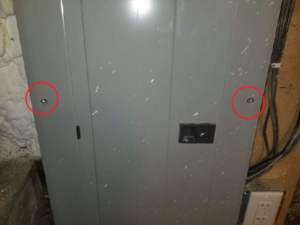